I made this illustrated PDF from the first video lecture of the course (Coursera) on Volcanic Eruptions: a material science.  By Donald Bruce Dingwell, from Ludwig-Maximilians-Universität München (LMU), in which I am enrroled now. Anyone can do it from the provided Subtitles (srt), just eliminating the video codes and adding the images from the PDF Graphics. I also include some links. I have so far the pdfs for the first two weeks and hope to have the rest in due time. If you think this may be of some help in the course, send an email to javillalobos@ice.co.cr, and I will send you a copy.
Remember that blogger (and word) may translate this text to many languages.
2-1-1-1 Why study volcanoes? Lecture 1 (12:05)
Welcome to Volcanic Eruptions: a Material Science.


I'm often asked, why study such a narrow topic as volcanoes? After all, I work in a university which is in the center of Europe which is a fair distance away from any individual active volcano. And of course the answer is fairly straightforward. Volcanoes are more than individual points of surface expression on the Earth. They are messengers from the deep. They carry an enormous amount of information from the depths of our Earth to the surface in very short time and in very fresh condition. As such, they are a host for very important datasets which tell us about what lies under our feet.
The second point is that these volcanoes, which have been running for the age of the Earth, are an essential part of how the Earth has evolved over time and it is due to the action of volcanoes and the fluid systems below them, so called magmatic systems, that we have a planet which is largely divided up into different geochemical reservoirs, from the depths of the core up to the surface of the earth. This differentiation of the Earth into essentially large radial units has been accomplished by the action of magmas and volcanoes over geological time.


Volcanoes have also been central to our own evolution. It's very likely that the heat and the particular chemistry that was provided by volcanoes and volcanic environments on the surface of the early earth have been vital in defining the conditions for the evolution of life. It's also very possible, as we'll see in a moment that volcanoes have been responsible for the extinction of certain forms of life in Earth history. And moving rapidly forward to the very recent past, to our own human evolution, there's clear evidence that human evolution probably arose in volcanically active regions and that the individual aspects of volcanic activity likely impacted human evolution again and again in its earliest stages.


Volcanism is also not constrained to Earth. Volcanism is now, as we estimate it, a relatively common event in planetary systems and we have evidence that we'll see in a moment which gives a flavor of this for our own solar system. So there are many reasons to look at volcanism. It’s not as simple as admiring or trying to explain the last eruption. There's much, much more to it and it rests on a broad foundation of Earth Science disciplines, including geochemistry, geophysics, geodesy, or the measurement of deformation of the Earth. And, in fact, a lot of basic physics and chemistry as well. The investigation of the materials which come out of the volcanoes, which is a key point of this course, also rests heavily on the foundation of the principles of petrology.
And the physical expression of the materials as it comes to the surface of the Earth and lies upon it, volcanology. Now, that's a lot of words.
Earth science is a very old and time-honored discipline. And it's differentiated itself, due to the complexity of the problem, into many, many sub-disciplines. And these sub-disciplines all carry with them, including volcanology, many, many phrases and much nomenclature, which describes the details of the products of these volcanoes, and the details of their observed behavior. Nevertheless, it is not my objective in this course to subject you to a drilling of the nomenclature of these processes. The prerequisites that we've set for this course, the requirements that are suggested for you to have in order to fully partake of what we're describing are basic physics and chemistry, as we've described. There's no requirement for you to have a previous understanding of Earth science, and therefore we will not swamp you with details from our discipline. We're more focused on the fundamental physical and chemical processes going on in these volcanoes. Also in the hope that one or the other of you will be inspired to go in this direction and potentially contribute to our understanding of volcanoes in the future. In any event, I hope to make it as enjoyable as possible. 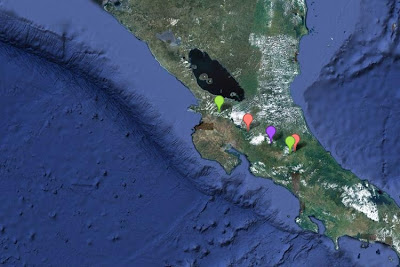 Now, next to the central role that volcanoes actually play over geological time in the evolution of the earth's system, of course there are modern-day and very immediate reasons to be concerned with what volcanoes are doing. You know this already, but I'll describe it for you very briefly. The areas around volcanic fields across the globe, which have been there long enough in order to develop soil profiles, are ones which are very, very fertile. And therefore one finds quite often, in ancient times and also in modern times, significant population centers which are centered immediately around volcanic complexes.


Think if I had to take, one or two countries, to describe this to the most effectively. I could take Japan, and even more impressively, perhaps, I could take Indonesia. These are very volcano rich countries. In the case of Indonesia, a very young, and very active volcanic country
And we have hundreds of millions of people none of whom are living more than a moderate distance away from any given active volcano. Countries in this part of the world, in the Asian Pacific rim, are, of course, growing enormously in importance as I speak. Their economies are growing; the diversification of their societies is growing. And therefore we can only expect that the emphasis and on, and the concern for volcanic eruptions is going to grow substantially as the coming decades of the 21st century unfold.


Now I'd like to, briefly step into the major phenomena, which you should've seen, in order to appreciate the magnitude of the problems that we're facing when we look at volcanic systems. In this first illustration, I make the point that the volcanic eruption, as a geological event, first of all is very, very short in time. It's viewed by people who study the geological past more or less as a tool to define an instant in time. That means that these are punctuation points, if you will, in geological history. And they leave deposits which are usually very useful because one knows wherever one finds a particular volcanic deposit from a volcanic eruption, that it has located itself in geological time, at the identical same point as anywhere else, where the same deposit is found. This could be on the scale of kilometers, it could be on the scale of tens of kilometers, however as we'll see it can also be regional, hemispheric or even global in extent... So, for most geoscientists, volcanic are at least very good time markers of the geological past. In the present diagram, you see the eruption as a red horizontal line, which simply runs across the diagram. 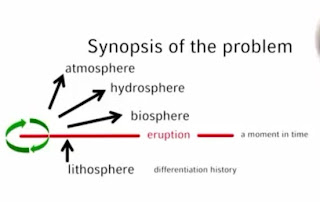 If you will, it's a one-dimensional description of the process.
You also see four other arrows on the diagram, all pointing, more or less, up and out of the system. The first is on the bottom, below the eruption, and it's described at the lithosphere. This sphere of lithos, of rocks, the lithosphere is the conduit through which volcanic material must come in order to achieve eruption at the Earth's surface. When volcanoes erupt, they take most of their own material with them in the form of the erupted rock. But they also occasionally take pieces of the lithosphere, which have simply been opportunistically broken off as the material comes through. So we get quite a sample of what was below when a volcano comes out at the surface. The other three arrows which lie above the eruption refer to the atmosphere, the hydrosphere and the biosphere. As you know, you experience the atmosphere every day; it's the basis of your breathing. You're a part of the biosphere, but it has vast complexity of species, all of which have not been mapped yet. And the hydrosphere you recognize well when you're down by the sea and you can see that two thirds of our planet is covered with a hydrospheric component.


Volcanoes occur both on land and under the sea. And therefore, when volcanoes erupt, to a greater or lesser extent, they are automatically reacting and interacting with the atmosphere, or with the hydrosphere, or with both. This interaction can be minor; it can involve oxidation of the surfaces of the rocks which come out. This would be a relatively trivial contribution and would be very local in extent. But as we'll see in a minute, some eruptions drive not only into the atmosphere, but all the way into the stratosphere, which lies at the top. And can be distributed in terms of their chemical effects on Earth's atmospheric chemistry and upon temperatures on the surface of the Earth on a global basis. Similarly major eruptions going into the sea floor can produce vast amounts of material which are chemically highly reactive.
And can influence the chemistry of the oceanic crust and the sea water which lies above it.


The last point, the biosphere. We are a part of this earth system. In fact, it is very likely that it could not have evolved in its entire entirety, as we see it today, without the presence of life on the surface and near the surface of the Earth. Anything that happens on or near on the surface of the earth is therefore going to be impacting also our biosphere. Volcanoes certainly do this. They do it in simple, dramatic ways, by costing life in violent eruptions, but they also do it in subtle ways by, for example, putting fine grained, so-called volcanic ash, high into the atmosphere and into the troposphere. Which is then, inhaled, and breathed in, by all species living on the surface, with potential acute and chronic health results. So view eruptions, if you will, and view the central role of volcanoes as the surface expressions of eruptions as one of the central ways in which the lithosphere, the rocky crust of the Earth is communicating occasionally, regularly,  continually, with the atmosphere, with the hydrosphere, and with the biosphere.