I made this illustrated PDF from the first video lecture of the course (Coursera) From the Big Bang to Dark Energy  by Hitoshi Murayama, from The University of Tokyo, in which I am enrolled now. Anyone can do it from the provided Subtitles (srt), just eliminating the video codes and adding the images from the PDFGraphics. It is a nice working tool; I used it in Volcanic Eruptions: a material science, with good results. The course starts today, but still there is time to enroll during this week.
Remember that blogger (and word) may translate this text to many languages.
Week 1: From daily life to the Big Bang
Introduction: Course Outline (08:37) 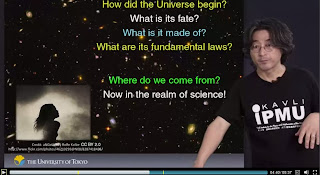 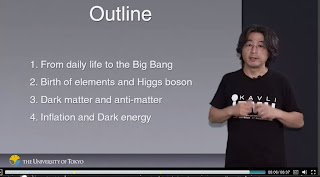 In the final lecture, the lecture number four, we talk about inflation and dark energy. So, if we really want to go back to very, very beginning of the universe, we think it's still hypothesis. But there's a very good evidence for it. We think there was a period called cosmic inflation that made the universe that was born at a much, much smaller size than an atom to a macroscopic size we see today. That's a tremendous expansion of the universe and that idea has been borne out with the latest data. So, we will talk about that and that was what happened at the very beginning of the universe. But it so happens that universe seems to have started yet another stage of inflation very recently. And that that has to do with this last subject called dark energy. And depending on the nature of dark energy, the universe may have an end. Or it may continue expanding forever. We don't know which one is the right Future yet, but Dark energy is definitely the key to that question. So, we'd like to talk about this very beginning of the universe as well as what might be waiting for us in the future that has to do with the nature of Dark energy. So, that will be my fourth lecture. So, that's the way I organize my lectures for this course.
Referencias:
http://www.youtube.com/watch?v=TGHqg9HuxkE
Publicadas por astrovilla2000 a la/s 09:26